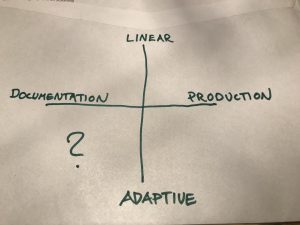 In the work of narrowing down the limitations of the scope for my studies I found it useful to draw this figure for music production models. I borrow the X-axis from my friend and colleague Jan-Olof Gullö (2014)
Sonic Signature Aspects in Research on Music Production Projects. In: Aalborg: ESSA/Aalborg University. (https://www.diva-portal.org/smash/get/diva2:781178/FULLTEXT01.pdf) Gullö describes two approaches for how to make music productions:

The recording is either documentation or production. An example of the documentation approach is a classical concert that is recorded with the objective to make it sound as similar as possible to the actual concert. In contrast, with a production there is no requirement to make the recording sound like a genuine acoustic event. With the production strategy the objective is to create reality, not to record it.

On the Y-axis, I’ve chosen “linear” and “adaptive”. Linear represents recorded music as we normally know it – songs on Spotify or Film music. Adaptive refers to music in interactive media like Computer Games or VR. The two upper quadrants are well defined by Gullö and the lower right covers most of the existing game music where the object is to create reality and make it adaptive to the game. The question rises: What to do with the lower left quadrant? Is it possible to have a documentative approach to the recording and still make it very adaptive? And if so; How can that be done? What challenges will we meet? Can it compete with a generative approach or will human composed and performed music in interactive environments be a historical monument belonging to the period when music sounded good but it weren’t that adaptive?

I quite like the lower left quadrant. I’ll run with it.

7 thoughts on “My quadrant”